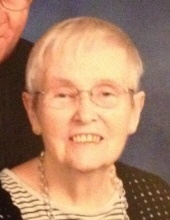 Joyce Mae West, 91, of Russellville, passed away Wednesday, June 3, 2020, at The Baptist Home in Chillicothe, Missouri.

She was born April 27, 1929, in Mayfield, Kentucky, the daughter of the late Bryant Hobart and Velora (Rives) Hill.

Joyce worked for more than 20 years as a retail clerk/cashier for A&P Grocery Stores and later for Woolworths In St. Louis, MO. For the last five years before she and Edward retired she was employed by McDonnell-Douglas Aircraft as a Copy Clerk. But her happiest career was caring for Edward, which she did for 75 years of marriage.

Joyce’s life revolved around her love for Jesus, Edward, her family and her church family. She was blessed with a beautiful singing voice and used it all her life to glorify God. Throughout her lifetime She sang solos, directed choirs of all ages and was a tireless encourager to budding musicians. Her voice was a gift and she truly gave it back to God as long as she was able. She was a member of Russellville Baptist Church. Joyce enjoyed crocheting, flowers, decorating her home, and of course, shopping.

She was preceded in death by her parents and granddaughter, Sandra Dawn Enke.

Visitation will be 4-6 p.m. Sunday, June 7, 2020, at Scrivner-Morrow Funeral Home in Russellville.

Memorials are suggested to Russellville Baptist Church or to The Baptist Home in Chillicothe.

Scrivner-Morrow Funeral Homes in Russellville is in charge of the arrangements.
To send flowers to the family in memory of Joyce Mae West, please visit our flower store.