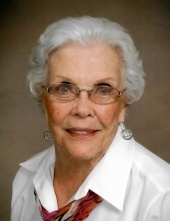 She was born on June 7, 1928, in DeKalb County, Missouri, the daughter of the late Clarence Boyd Robinson and Anna May Ford Robinson.

Mrs. Lewis was employed as a secretary for over thirty years at the Missouri State Capitol in both the Senate and House of Representatives. She also worked for the Missouri Department of Revenue.

She was a seventy-year member of First United Methodist Church and its Harmony Sunday School Class.

She was also a member of Meadow Lake Acres Country Club, Elks Club, and past president of the Georgetown Neighborhood Association.

She was preceded in death by one son, James Robinson Lewis; one brother, Wilbur Robinson; and three sisters, Doris Juergensen, Betty Babcock, and Erma Zartman.

Entombment will in Riverview Cemetery Mausoleum.

To send flowers to the family in memory of Joyce Lewis, please visit our flower store.