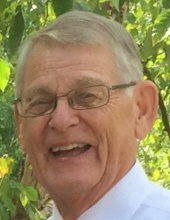 He was born on March 17, 1937, in Independence, Missouri, the son of the late Richard Roy and Hattie Jane (Griffitts) Ryan. Joe was raised by his aunt and uncle, Harvey and Gertrude Sheffer.

He was united in marriage on December 28, 1963, at the St. Peter Catholic Church in Marshall, Missouri to Mary Kay Bruns, who survives at the home.

Over Joe’s long career in the home improvement industry, he worked as the store manager for Sherwin Williams Paint in Sedalia; Architectural and Company Representative for Benjamin Moore Paint Company; Manager of the Carpet and Flooring Department at Fab Building Center; and Sommers Interiors, retiring in 1997. For many years during his retirement, he worked for Dulle-Trimble Funeral Home.

Joe was a member of Immaculate Conception Catholic Church, Holy Name Society, and the “Dream Team”. He served for many years as an Election Judge and volunteered at the ABLE book sale.

Joe enjoyed playing lots of golf, attending sporting events of the St. Louis Cardinals, Kansas City Chiefs and the University of Missouri Mizzou Tigers. Surprisingly, he loved shopping with his wife. Joe was an avid reader of westerns and history novels; watching all western movies, especially John Wayne movies; playing cards, board games, and spending time outside at night on his deck. Not only did he love being “Mr. Fix-it" for his family and friends, he often made the perfect wood item for them. He had a big and loving heart with a great sense of humor. He loved his job at Dulle Trimble Funeral Home as well as being on the “Dream Team” at his church.

Joe’s kids, grandkids and family were the world to him. He loved everything about being a father to his 3 children and “Papa” to his 8 grandkids. He was always there for them whether it be attending one of their events, babysitting, helping them move, fixing or building something for them, playing games, traveling with them, or just spending special time with them and being an active part of their lives.

He was preceded in death by his parents; brothers, Richard Ryan, and John Ryan; and sisters, Virginia Ryan, Florence Ryan, Betty Quilenderino, and Alice McFadden.

Those wishing to email tributes or condolences to the family may do so at the www.dulletrimble.com website.
To send flowers to the family in memory of Joseph Robert Ryan, please visit our flower store.