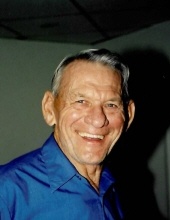 He was born April 13, 1931, in Cole County, the son of Clarence Joseph and Rose Catherine (Goeller) Brauner.

He served his country with the United States Navy during the Korean Conflict.

Joe worked for forty years in Road Maintenance for the Missouri Department of Transportation, retiring January 1, 1990.

Joe loved to dance and play cards but his favorite times were spent with his family. He was famous in his family for calling each person and singing happy birthday every year.

He was preceded in death by an infant daughter, Cecilia Brauner; a son, Patrick Brauner; a brother, Walter Brauner; a sister-in-law, Margaret Reinkemeyer; and two brothers-in-law, Paul Veit and Martin Distler.

Memorials are suggested to the Cathedral of St. Joseph or to Alzheimer’s Association.

Those wishing to send condolences to the family may do so at www.dulletrimble.com.
To send flowers to the family in memory of Joseph Herman Brauner, please visit our flower store.