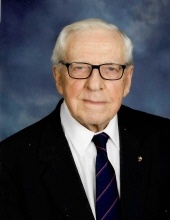 He was born on October 6, 1926, in Cole County, the son of Henry Joseph and Anna Clara (Baumann) Schulte.

He was united in marriage at St. Martin Catholic Church on June 3, 1952, to Margaret Renilda Niekamp, who survives at the home.

He was the appliance service manager for Jefferson City Distributors for thirty-four years, retiring in 1991. He also was a dairy farmer and provided milk to the Kraft Dairy in Eldon.

Memorials are suggested to St. Martin Catholic Church, Knights of Columbus or to Helias Foundation.
To send flowers to the family in memory of Joseph Edward "Joe" Schulte, please visit our flower store.