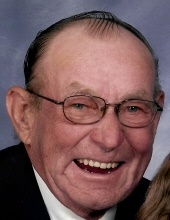 He was married on June 17, 1967, at St. Peter Catholic Church in Jefferson City to Alice Ann Heimericks, who resides at the home.

Joe worked for thirty years for Cole County Industries in the plant maintenance department and was a truck driver. In earlier years, he worked for the State of Missouri Department of Transportation repairing roads and bridges and worked a short time at Delong’s Inc.

He was a member of St. Martin Catholic Church, Knights of Columbus, and the American Legion of Centertown.

During the Bicentennial in 1976, Joe was serving as Mayor of St. Martin and his whole family enjoyed the many festivities. He enjoyed spending time on the farm checking his cows, taking daily drives up and down the road checking on his neighbors, taking the grandkids rides on his gator, deer hunting, trout fishing at Bennett Springs, and playing card games of pitch and solitaire. He had the unique hobby of collecting ink pens, calendars, and free gadgets that came in the mail. He was proud of his grandchildren and their many accomplishments.

Burial will be in St. Martin Catholic Cemetery with military honors.

In lieu of flowers, memorials are suggested to the Central Missouri Honor Flight or to wishes of the family.

To send flowers to the family in memory of Joseph Bernard Huhn, please visit our flower store.