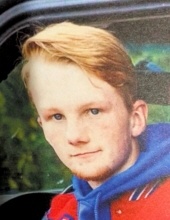 He was born September 18, 2001, in Jefferson City, the son of Danny Lee and the late Andrea Louise (Bahleda) Bondurant.

Jordan was a 2020 graduate of California High School where he participated in basketball and golf. He was currently attending State Technical College of Missouri studying Turf Management and was graduating in March.

Jordan enjoyed playing rounds of golf with his friends as well as being a rifle and bow hunter of many seasons including deer, turkey, and coyote. Jordan was also an avid fisherman and bow-fisherman. Jordan enjoyed working out, playing poker, ping pong, and pool, scratching lottery tickets (especially with his cousin, Kory), playing basketball, attending family dinner nights, and hanging out with his family and friends playing cornhole.

He was preceded in death by his beloved mother, Andrea Louise Bondurant who passed away on May 26, 2020.

The family requests instead of flowers and gifts that only memorials be offered to California R-1 and Linn Tech for future Scholarships.

To send flowers to the family in memory of Jordan Lee Bondurant, please visit our flower store.