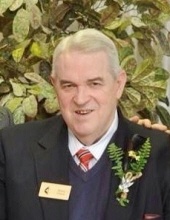 Steve was born January 7, 1947, in Rogers, Ark., to James D. and Jimmie Dean Charton. He graduated from Little Rock Central High School and attended Ouachita Baptist University and the University of Central Arkansas.

He was a Vietnam-era veteran of the U.S. Navy.

Steve was a member and sang in the choir of First United Methodist Church of Jefferson City.

Steve was a Certified Association Executive. He served for several decades as executive director and lobbyist for multiple trade and professional associations in Arkansas and Louisiana. He also served as a delegate to the White House Conference on Small Business. Steve also served on the staff of Arkansas Secretary of State W.J. “Bill” McCuen and on the early campaigns of future U.S. Senator Mark Pryor of Arkansas.

The family offers sincere thanks to the ICU team at SSM St. Mary’s Hospital, especially Laura Cramer, Aaron Jackson and Brandi Booki, and to the staff of Villa Marie - Stonebridge Senior Living in Jefferson City, for their devoted care.

A Celebration of Life for Steve Charton will be held at 2 p.m. Thursday, Feb. 13, at the Activity Room of Villa Marie Senior Living at 1030 Edmonds Street, Jefferson City, MO 65109.

In lieu of flowers, memorials may be made to First United Methodist Church, 201 Monroe St., Jefferson City, MO, or to a charity of the donor’s choice.

Those wishing to send condolences to the family may do so at the www.dulletrimble.com website.
To send flowers to the family in memory of John Stephen Charton, please visit our flower store.