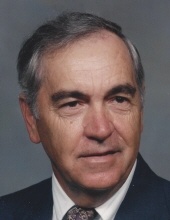 He was born October 29, 1935, in Pittsburg, Kansas, the son of the late George A. Hunter and Lottie DeGasperi Hunter.

He was a graduate of Pittsburg High School in Pittsburg, Kansas and received his Bachelor’s degree in Electrical Engineering from Kansas University.

John served his country proudly in the Army and National Guard for six years.

He was united in marriage on February 1, 1963, in Columbia, Missouri to his loving wife of 55 years, Ginger McAllister.

John moved to Jefferson City, Missouri in 1970 to work for Howerton Electric as an Electrical Engineer. In 1976, John established his own business, John L. Hunter, Incorporated. In 1978, he joined with Richard A. Howerton Electric where he never retired, but instead enjoyed his work family and partners for 40 years.

John was an avid Muskie, Bass, and Trout fisherman sharing his love of fishing with his family and grandsons. John also enjoyed trap shooting; quail and pheasant hunting; tomato gardening, golfing; and was a founding member of Meadow Lake Acres Country Club. Most importantly, he cherished his time with his grandsons, especially their annual fishing trip to Canada.

He was preceded in death by his parents and brother, James Ray Hunter.

Visitation will be Wednesday from 4:30PM to 7PM at Dulle-Trimble Funeral Home with a prayer service at 4PM.

Funeral Liturgy Service will be Thursday at 10AM at the Cathedral of St. Joseph with the Rev. Msgr. Robert A. Kurwicki officiating.

Burial with military honors will be in Resurrection Cemetery. Following the burial service, lunch will be held at the Cathedral of St. Joseph.

Memorials are suggested to the Missouri Department of Conservation for Kids Fishing & Youth Hunting Clinics; or to the Cathedral of St. Joseph.

Those wishing to email tributes or condolences to the family may do so at the www.dulletrimble.com website.
To send flowers to the family in memory of John Lee Hunter, please visit our flower store.