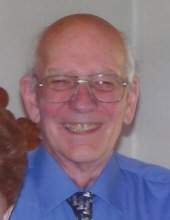 He was born on January 21, 1934, in Jefferson City, the son of the late Henry Otto Sturm and Juliet Catherine Skain Sturm.

He was married on September 29, 1956, in Jefferson City to Colleen D. Slaughter who survives at the home.

After service in New Mexico with the United States Army from 1956 to 1958, he was employed for thirty-seven years as a conductor with the Union Pacific Railroad until his retirement.

Jack was a member of Saint Peter Catholic Church and enjoyed many interests and hobbies including history, politics, reading, model railroading, making homemade ice cream, and spending time with his children and grandchildren.

He was preceded in death by one sister, Ann Knollmeyer.

Mr. Sturm donated his body to the University of Missouri Anatomical Program.

Those wishing to email tributes or condolences to the family may do so at the www.dulletrimble.com website.
To send flowers to the family in memory of John Henry "Jack" Sturm, please visit our flower store.