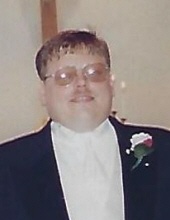 He was born August 17, 1967, in Jefferson City, the son of John Franklin Willis, Jr. and Ruby Jean Fuller Birch.

He was united in marriage on May 12, 2001, in Warsaw, Missouri to Cynthia Leigh Fugate who survives at the home.

John worked for several years as an over-the-road truck driver. He attended St. Michael Catholic Church in Russellville and was a member of the Moose Lodge. In his earlier years he enjoyed hunting and fishing. He also enjoyed working on his truck and mowing the lawn. His greatest love was spending time with his family especially his grandchildren.

Visitation will be 1:30-3 p.m. Sunday, June 9, 2019, at St. Michael Catholic Church in Russellville with a prayer service at 3 p.m. with the Rev. Msgr. Robert A Kurwicki officiating.

Burial will be in Big Rock Cemetery in Barnett.

Those wishing to send condolences to the family may do so at the www.scrivnermorrowrussellville.com website.
To send flowers to the family in memory of John Franklin Willis, III, please visit our flower store.