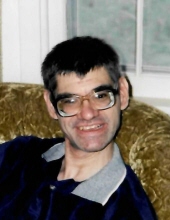 Fortified with the Sacraments of the Holy Mother Church, John Gerling (a very special person) entered into eternal rest on Sunday, August 15, 2021, at the University of Missouri Medical Center in Columbia, Missouri.

John was a special needs adult and resided at the Thatcher Group Home in Fulton, Missouri.

He enjoyed singing Karaoke at the Tim Tebow “Night to Shine” Foundation event. He also enjoyed bowling, music, watching Gunsmoke, attending Camp Wonderland and visits by his brothers and their wives.

John had a remarkable memory for events early in his life. He was loved by all and will be sorely missed.

He was preceded in death by his parents and a brother, Richard “Dick” Gerling.

Memorials are suggested to the Tim Tebow Foundation-Night to Shine, www.timtebowfoundation.org/night-to-shine or Camp Wonderland-Donate to Wonderland Camp|Lake of the Ozarks, Missouri.

Those wishing to send condolences to the family may do so at www.dulletrimble.com.
To send flowers to the family in memory of John Francis Gerling, please visit our flower store.