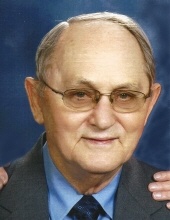 He was a 1946 graduate of Tipton High School.

He was united in marriage to Mary Elizabeth Kraus on May 17, 1952, at Immaculate Conception Catholic Church in Jefferson City. John and Mary celebrated their 68th wedding anniversary in May.

He was preceded in death by his parents; two siblings, Raymond (Carlene) Bollinger, Louise (James) Irey, and one brother-in-law, Frederic Martin.

Mass of Christian Burial will be 11 a.m. Saturday, November 21, 2020, at Immaculate Conception Catholic Church with the Rev. Donald Antweiler officiating.

Those wishing to send condolences to the family may do so at the www.dulletrimble.com website.
To send flowers to the family in memory of John Anthony Bollinger, please visit our flower store.