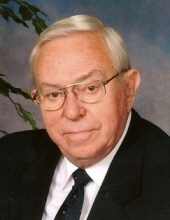 John Allen Rockwell, Jr., 84, of Jefferson City passed away on Friday, August 28, 2020, at home while recovering from a fall and surgery.

John was born on November 20, 1934, in Kane, Pennsylvania to his parents John Allen Rockwell, Sr. and his mother Rachel Rockwell.

He was united in marriage on January 24, 1961, in Fort Smith, Arkansas to Carolyn Kidd who survives at the home.

John Allen Rockwell, Jr. was a loving husband and devoted father who served in the United States Air National Guard during the Berlin Crisis.

He loved owning his sailboat, the Blade II, and participating with the Lake Ozark Yacht Club. In retirement, he was a productive small business owner and a fun-loving, devoted grandfather. John enjoyed doing genealogy and investigating information on his computer.

Visitation will be 1-2 p.m. Tuesday, September 1, 2020, at Dulle-Trimble Funeral Home with funeral services to follow at 2 p.m. with Rev. Trevor Dancer officiating.

Burial with military honors will be in Longview Cemetery.

Those wishing to send condolences to the family may do so at the www.dulletrimble.com website.
To send flowers to the family in memory of John Allen Rockwell, Jr., please visit our flower store.