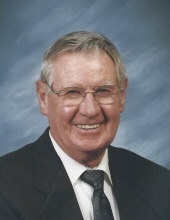 Jerry Gene McCarty, 88, of California, passed away Tuesday, July 27, 2021, on the farm near Russellville surrounded by his family.

He was born February 21, 1933, in Russellville, the son of the late John Martin and Elizabeth Magdalena (Kubli) McCarty.

He was a 1952 graduate of Russellville High School.

Jerry served in the United States Army during the Korean Conflict with the Military Police.

He was united in marriage in November of 1992 at United Church of Christ in California to Lola Kusgen Bird who survives at the home.

Following his service in law enforcement in the Army, he was a Moniteau County Sheriff deputy for several years before becoming Sheriff of Moniteau County from 1968-1976. In 1979, he became the Chief of Police of California retiring after 19 years. Jerry had also owned and operated a paint store in Russellville and worked as a realtor for Moniteau County Realty.

He was a member of Corticelli Baptist Church and was a member of the California Masons. Jerry enjoyed hunting and fishing, going antiquing, farming, being a handy-man, coaching Lions little league baseball, and especially spending time with his family.

Funeral service will be 12 Noon Saturday at Scrivner-Morrow Funeral Homes in Russellville with Dr. Rick Seaton and Rev. Russell Cobb officiating. The service will be recorded and posted to his obituary page on Monday.

Burial with military honor will be in Enloe Cemetery.

Memorials are suggested to the Moniteau County Veterans Memorial.

Those wishing to send condolences to the family may do so at the www.scrivnermorrowrussellville.com website.
To send flowers to the family in memory of Jerry Gene McCarty, please visit our flower store.