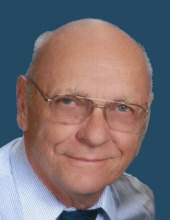 Jerry was born on September 3, 1934, in St. Thomas, the son of the late August Raymond and Leona Elizabeth (Wieberg) Loethen.

After attending Catholic school in St. Thomas, Jerry served in the United States Air Force where he studied electronics. When his father became ill, he received a hardship discharge to return home to care for his family. Caring for others would become a theme that carried throughout Jerry’s life.

Following his military service, mutual friends introduced Jerry to Sue Elizabeth Anderson. They were married on November 29, 1958, at Immaculate Conception Catholic Church in Jefferson City, where Jerry remained a member until his passing.

Jerry was employed as a switch room supervisor at Sprint, retiring in 2000 after 34 years of service.

Jerry had an exceptional ability to understand and explain how all sorts of things worked and how to fix them. He could solve most any technical problem presented, earning him an admirable reputation as the neighborhood go-to guy for everything from electrical to plumbing to construction issues and beyond. But perhaps no one called upon Jerry’s broad knowledge more often than his children, who benefited from many a do-it-yourself project completed or guided by Jerry over the years.

Family was the center of Jerry’s life. He relished family gatherings and attending his grandchildren’s plays, sporting events, and graduations. In earlier years, family vacations – particularly those to Michigan, Colorado, and California via car – remain especially memorable to his children. Jerry was patient, kind, and also humble, yet tremendously proud of his children and grandchildren and the life that he and Sue built together.

Jerry was preceded in death by his parents and a brother, Donald Loethen.

Memorials are suggested to Immaculate Conception Catholic Church and the National Kidney Foundation.

Those wishing to email tributes or condolences to the family may do so at the www.dulletrimble.com website.
To send flowers to the family in memory of Jerome Anton Loethen, please visit our flower store.