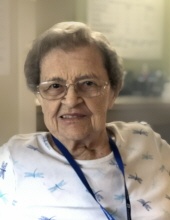 She was born September 18, 1933, in Jefferson City, the daughter of the late Carl Everett and Minnie “Pat” (Reynolds) Stone.

She was a 1951 graduate of Jefferson City High School.

She was united in marriage on December 25, 1953, in Jefferson City, to Stanley T. Zimmerman.

Jean worked for Central Bank as a bookkeeper for over 24 years.

She was a member of First Christian Church. She was kind-hearted and loved her children and grandchildren more than anything. She enjoyed board games, watching game shows, sewing, and collectibles.

She was preceded in death by her parents; brother, Ralph Stone; and sister, Hazel “Tootie” Schenewerk.

Out of current health concerns, a graveside service is planned for family at Riverview Cemetery. Details for a future Celebration of Life to be announced.

Those wishing to send condolences to the family may do so at the www.dulletrimble.com website.
To send flowers to the family in memory of Jean Ann Zimmerman, please visit our flower store.