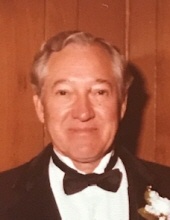 He was born August 1, 1927, in Ravenden Spring, Arkansas, the son of the late George Henry and Victoria Lou (Bishop) Jackson.

JB served in the United States Army with the 42nd Armored Infantry during World War II and the Korean Conflict. He was an expert Sharpshooter and a Medic. During his service, he was a recipient of the Purple Heart.

Following his return from World War II, he was united in marriage on November 17, 1946, to Estella Laverne Weeks who preceded him in death on September 14, 1996.

JB spent his career working for the Missouri State Highway Department as a Soils Geologist. He also consulted on many of the state and federal highway projects that most people still travel on. He was a member of First Baptist Church in Jefferson City where he served as a deacon, the Sportsman Club in Jefferson City, was honored as a State Farmer from the FFA, and helped to develop the Cole County Water District.

He was preceded in death by his parents; his wife, Estella Jackson; and eleven brothers and sisters.

Entombment with military honors will be held at Hawthorn Memorial Gardens at a later date.

Scrivner-Morrow Funeral Homes in Russellville is in charge of the arrangements.
To send flowers to the family in memory of JB Darrell Jackson, please visit our flower store.