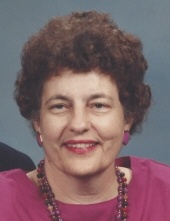 She was born December 28, 1935, in Indianola, Iowa, the daughter of the late David Wade and Faye Leona (Parrett) Wooderson.

Janice was a 1953 graduate of Jefferson City High School.

She was a former member of First United Methodist Church. Following her marriage to Robert Hohenstreet, she attended St. Peter Catholic Church.

She enjoyed playing cards and gardening especially working with her iris. Janice loved horses and Scotty dogs her entire life and had several Scotties over her lifetime. She loved her family and babysitting her grandchildren and being involved in whatever her family was doing.

Memorials are suggested to the American Alzheimer’s Association.

Those wishing to email tributes or condolences to the family may do so at the www.dulletrimble.com website.
To send flowers to the family in memory of Janice Rea Blankenship Hohenstreet, please visit our flower store.