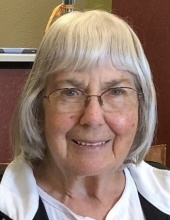 She was born August 17, 1937, in Burlington, Iowa, the daughter of the late Cecil Edward and Catherine Anna (Cronk) Bliss.

Janet worked for the Missouri Secretary of State office as a microfilm machine operator. She later worked for B Clean Coin Laundry & Dry Cleaners in Jefferson City. She enjoyed sewing and embroidering, making porcelain dolls, ceramics, reading, and doing puzzles.

She was preceded in death by her parents; two sisters, Barbara Brown and Carol Sickels; and one brother, Donald Bliss.

Funeral service will be 6 p.m. Monday at Dulle-Trimble Funeral Home with the Rev. I.C. Medina officiating.

Memorials are suggested to the Special Learning Center or to the Alzheimer's Association.

Those wishing to send condolences to the family may do so at the www.dulletrimble.com website.
To send flowers to the family in memory of Janet Elaine Messer, please visit our flower store.