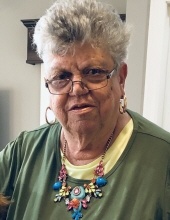 She was born April 8, 1945, in Indianapolis, Indiana, the daughter of the late Herman and Margaret Wright Drury.

She was united in marriage on September 1, 1973, in Olney, Illinois to Edwin Dean Brooks who preceded her in death on January 5, 2003.

Jane worked for over 30 years at the Jefferson City Walmart as a switchboard operator. She also was a loving homemaker and babysitter. In her free time, she enjoyed shopping and watching MU basketball. She enjoyed lunches and time spent with her best girlfriends. Her greatest moments were when she was with her grandchildren.

She was preceded in death by her parents; her husband, Edwin Brooks; and a brother, Doug Drury.

Graveside service will be 11:30 a.m. Monday at Riverview Cemetery with the Rev. Louis Nelen officiating.

Those wishing to send condolences to the family may do so at the www.dulletrimble.com website.
To send flowers to the family in memory of Jane Ann Brooks, please visit our flower store.