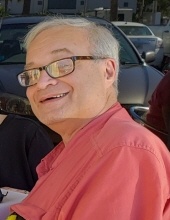 He was born on November 19, 1957, in Columbia, Missouri, the son of the late Paul Masaryck Kovar and Marie Miller Kovar.

He was married on December 21, 1986, in Jefferson City to Ann Jordan Seigfreid who survives at the home. Their marriage was full of adventures and laughter.

Mr. Kovar worked with the Missouri Democratic Committee from 1984 to 1989, and with AmerenUE Corporation from 1989 to the present as a Consulting Engineer with the Nuclear Regulatory Commission.

He was a member of the National and Missouri Societies of Professional Engineers.

Visitation will be 9-11 a.m. Saturday, May 14, 2022, at Dulle-Trimble Funeral Home with a memorial service to follow at 11 a.m. with the Reverend Jeremy Secrist officiating.

Entombment will be in St. Brendan Cemetery, Mexico, Mo.

To send flowers to the family in memory of James Paul "Jim" Kovar, please visit our flower store.