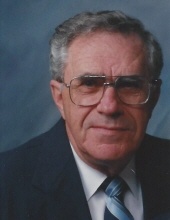 He was born on December 17, 1930, in Oakside, Missouri, the son of the late Delmer Loyd and Melba Hattie Smith Hamilton.

He was married on March 7, 1953, in Jefferson City to Anita Marie Mengwasser who resides at the home.

A 1949 graduate of Aurora High School in California, Missouri, Mr. Hamilton made the United states Air Force his career serving his country for over twenty-five years. Enlisting immediately after high school, his career consisted of service with the World War II Occupations Forces on Okinawa and throughout the Korean Conflict and Vietnam Era. He received six bronze stars for six major campaigns. He retired in 1974 with the rank of Chief Master Sergeant at the conclusion of the Cold War taking a job as assistant manager of a private country club in Tyler, Texas. Holding an FCC license, he worked as an Electronic Technician at the Fulton Diagnostic Center for a short time. He also worked at Towner Communication, A&B Radio, and Apache Electronics.

He was a lifetime member of VFW Post 1003; the 623rd Aircraft Control and Warning Association; Armed Forces Top Enlisted Association; and several other retired enlisted organizations. He was one of the original members of the Cole County Sheriff’s Posse, volunteering with that organization for ten years.

He was preceded in death by one sister, LaVern Walters.

A memorial service will be 1 p.m., Tuesday, April 23, 2019, at Dulle-Trimble Funeral Home with the Rev. Dr. Brian Credille officiating.

Burial will be in Springfield Southwood Cemetery.

In lieu of flowers, memorials are suggested to Cole County Sheriff’s Posse.
To send flowers to the family in memory of James Lawrence Hamilton, please visit our flower store.