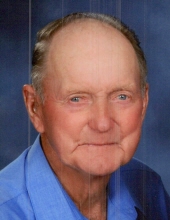 James Henry Huhn, age 86, of Folk, Missouri, passed away peacefully on Monday, September 20th at his home surrounded by his loving family. James was born on May 17, 1935, in Folk, Missouri, the son of Ben and Hilda (Kaiser) Huhn. He was united in marriage to Claire Ann (Strope) on May 2, 1964 in St Thomas at St. Thomas the Apostle Church.

James attended St. Anthony of Padua of Folk school until the eighth grade. He joined the U.S. Army as a private for a short time until he was honorably discharged to take care of the family farm.
James was employed at Netwig lumber yard. Then he worked with a neighbor cutting railroad ties for several years. He also was employed as a truck driver with his brothers at Huhn Bros. Trucking until he left to farm with his brother Edward. He was a lifetime farmer where he owned dairy cattle for 39 years and raised beef, chickens, hogs, and crops. He was an active member of St. Anthony of Padua Church.
James thoroughly enjoyed spending time with his family, his dogs and being on the farm. He was a baseball coach for his sons’ baseball team for multiple years and bowled. He would take his grandchildren on four-wheeler rides to the creek and sled rides in the snow during the winter. James loved to play ball in the backyard with his children and grandchildren at family gatherings. He enjoyed attending his grandchildren’s many sporting events. James loved to fish and hunt as well as a great game of cards and Bingo.

Memorials may be directed to the Alzheimer Association or Hospice Compassus.

Those wishing to email tributes or condolences to the family may do so at the www.dulletrimble.com website
To send flowers to the family in memory of James Henry Huhn, please visit our flower store.