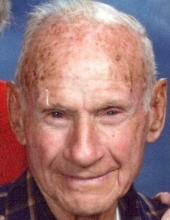 James H. Steen, 91, of Holts Summit, passed away peacefully surrounded by his family on Wednesday, January 6, 2021, at Summit Villa in Holts Summit.

He was born June 15, 1929, in Kirksville, Missouri, the son of the late Matthew Warren and Fannie Myrtle (Martin) Steen. Jim was the last member of the 12 siblings.

He was united in marriage on August 28, 1945, in Lancaster, Missouri, to Juanita June Munn who survives.

Jim was a terminal manager for Orscheln Truck Line for 30 years. He was a pilot and provided local flying for area businesses and was a row crop and cattle farmer.

In 1982, after retirement, he started his own salvage business, Cole County Iron & Metal. For him, it was a challenge to see how much iron he could cut up in a day and was enjoyable because of the many friendships made along the way. Jim ran business on a handshake and a fair deal. Jim loved the outdoors and had a tremendous work ethic.

He also enjoyed RV traveling and bluegrass music festivals with June, who he affectionately referred to as “my bride”, by his side.

Jim was a member of Dry Fork Baptist Church in New Bloomfield.

Private family services will be held at Dulle-Trimble Funeral Home with burial in the Queen City Cemetery in Queen City, Missouri.

Memorials are suggested to the Samaritan Center.

Those wishing to send condolences to the family may do so at the www.dulletrimble.com website.
To send flowers to the family in memory of James H. Steen, please visit our flower store.