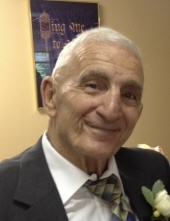 George was the third of seven boys born to Louis Albert and Anna (Costantino) Marcantonio. George’s father Louis had immigrated to the United States from Italy in the early 1900s. Born in Cambridge, MA, George also called Wayland, MA “home”.

George was proceeded in death by his parents and brothers Albert (who died in infancy), Albert, Johnny, Gabriel and Tommy. His younger brother, Richard (Jeanne), survives in Irvington, NY.

George left high school in 1942 to help support his family and went to work alongside his mother at a local manufacturer building equipment used by the United States Navy. He enlisted in the Navy at age 17 and proudly served on a PT boat in both the Atlantic and Pacific venues of World War II. When George was in his eighties, he never passed up an opportunity to tell anyone about his Navy experience and his PT boat assignments.

After the war, George returned home and graduated from Wayland High School in 1948. He then used the GI bill to attend one semester of college at the University of Miami in Miami, FL before transferring to Central College (now Central Methodist University) in Fayette, MO. As part of his pursuit of a college degree, he sought a college where he could play football and found that at Central College. George earned a bachelor’s degree in 1952 and immediately began his teaching career in the spring of 1952 with a position at Tuscumbia, MO.

While teaching at Tuscumbia High School, he met the love of his life and future wife, Fern Olive Wood. After Fern graduated from high school, George and she had their first date and within months wed in Saxonville, MA on September 2, 1952. They celebrated their 68th anniversary in 2020.

George worked as a teacher and coach in various Missouri School Districts including Linn, Sturgeon, Hallsville and Faucett. In 1968, he began his career as a caseworker with the Missouri Department of Corrections in Jefferson City, MO where he worked until he retired in 1985.

James and Fern were blessed with five children; four daughters and one son. George is survived by four children: Brenda (Randy) Reed, Centertown; Jim (Lori) Marcantonio, Jr., Camdenton; Robin (Steve) Coffman and Melody Marcantonio, Jefferson City. He is preceded in death by his daughter Debbie Luetkemeyer and her husband Nicholas.

George and Fern stressed the importance of a college education to their children with all earning at least a bachelor’s degree. George was proud of this fact.

George quit smoking at age 55 and began to participate in track and field including running, race walking, broad jumping, discus, and throwing the shot. He also began to competitively swim. George earned many trophies, medals and accolades as he loved to participate in the Show-Me State Games and Senior Olympics which he did for over two decades.

Because of his love of sports, he avidly followed and watched his grandchildren and great grandchildren in their extracurricular activities. It was common knowledge “Grandpa George” was in the stadium, in the gymnasium or at the track. He could definitely be heard cheering or, perhaps, chastising the referee when he thought a call was wrong.

George truly loved interacting with children. He not only taught all his children to swim, but also every one of his grandchildren.

He and Fern owned property (“the camper”) that allowed the family to gather every weekend during the summers to enjoy swimming, fishing and running Grandpa’s golf carts all over the trails near the Gasconade River. The grandchildren all have memories of holiday weekend bingo games and cake walks. Grandpa George’s barbecued hamburgers have never been topped. George, himself, was known for his sweet tooth and his love of buffets, especially the dessert bars.

The family is having a private visitation on Saturday, March 6, 2021 at 1 p.m. at Dulle-Trimble Funeral Home.

Private family service will be held at 2 p.m. Saturday at Dulle-Trimble Funeral Home. The service will be live streamed for those who wish to watch from home. The link can be found on George’s obituary page under Tribute Wall at www.dulletrimble.com.

Those wishing to send condolences to the family may do so at the www.dulletrimble.com website.
To send flowers to the family in memory of James George Marcantonio, Sr., please visit our flower store.