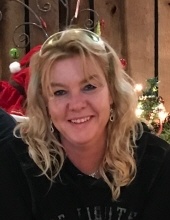 Ivy attended Eugene High School and worked for Quaker Windows, Jiffy Lube, Playmore Trailers, was an aid for a local nursing home, and helped her step-father, Bob, in construction.

She was a member of St. Anthony of Padua Catholic Church in Folk, enjoyed all crafts especially drawing and painting, spending time outdoors with animals, and gardening.

She was preceded in death by her step-father, Robert “Bob” Thompson; two infant grandchildren, Alex Paul and Taylor Lee Patten; and her grandfather, Virgil Kempker.

Burial will be in St Anthony Cemetery.

In lieu of flowers, memorials are suggested to Deborah Thompson to help with expenses.

Those wishing to send condolences to the family may do so at the www.dulletrimble.com website.
To send flowers to the family in memory of Ivy Lee Elizabeth Kempker, please visit our flower store.