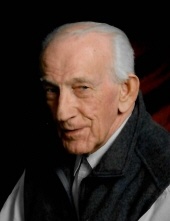 He was born September 24, 1936, in St. Louis, the son of Robert and Myrtle (Freeman) Schlotterbeck

He was married on March 3, 1962, in Pagedale, Missouri to Gerry Szepanski, who resides at the home.

Ivan retired in September 1999, after thirty-six years from Graybar Electric Company as a salesman.

He was a member of the Cathedral of St. Joseph and past president of the Men’s Association.

Ivan’s interests centered around his family and sports. He was the CYO basketball coach in Jefferson City and Boy Scout leader in St. Charles. He enjoyed model railroading, bowling, softball and especially loved to travel, tinker, and watch the St. Louis Cardinals. Ivan was an avid pinochle player.

He was preceded in death by his parents and four siblings

In lieu of flowers, memorials are suggested to Vitae Society or to St. Raymond’s Society.

Those wishing to send condolences to the family may do so at www.dulletrimble.com.
To send flowers to the family in memory of Ivan Lee Schlotterbeck, please visit our flower store.