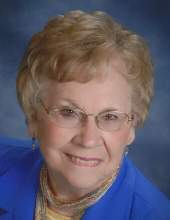 She was united in marriage on February 5, 1947, in Jefferson City to Arthur Olen Smith, who preceded her in death on December 5, 1992.

She was employed with Capital City Telephone Company, Farm Bureau, and the State of Missouri Division of Finance until her retirement in 1990. She later worked part-time for many years at the Missouri Lions State Office.

She was a member of Immaculate Conception Church, St. Ann’s Sodality and Jefferson City Capital Lions. She volunteered for many years at Capital Region Medical Center and the Samaritan Center.

She was preceded in death by her parents, husband, a son, Dennis Smith, a sister, Gladys Davis and a brother, Jack Weaver.

Those wishing to email tributes or condolences to the family may do so at the www.dulletrimble.com website.
To send flowers to the family in memory of Irene Helen Smith, please visit our flower store.