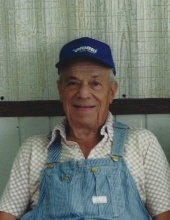 He was born July 10, 1928, in Russellville, the son of the late Edward and Marie (Strobel) Buchta.

On July 25, 1959, at St. George Catholic Church in Linn, Hugo was united in marriage to Frieda Hilda Marie Moeller who preceded him in death on September 19, 2014.

Hugo worked for Cargill and was a farmer raising chickens and cows. He also enjoyed cutting wood on the farm, tending to his vegetable garden, and spending time with his family and friends.

He was preceded in death by his parents; his wife, Frieda Buchta; one sister, Lina Buchta; and two brothers, Carl and Eugene Buchta.

Visitation will be 5-7 p.m. Monday, January 6, 2020, at Scrivner-Morrow Funeral Homes in Russellville.

Funeral services will be 10 a.m. Tuesday at the Scrivner-Morrow Funeral Homes in Russellville with Pastor Dinzel Webb officiating.

Burial will be in the Enloe Cemetery.

Scrivner-Morrow Funeral Homes in Russellville is in charge of the arrangements.
To send flowers to the family in memory of Hugo Andy Julius Buchta, please visit our flower store.