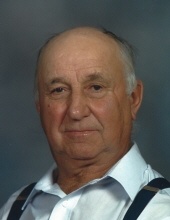 He was born April 12, 1930, on the Strobel family farm near Lohman, the son of Herman Paul and Elizabeth Barbara (Heinrich) Strobel.

He attended Mt. Hope School near Russellville. He was confirmed as a member of Trinity Lutheran Church in Russellville on April 14, 1946, where he was a lifelong member.

Herb was united in marriage on February 24, 1973, to Helen Delores Pace of California, Missouri, at Trinity Lutheran Church; she preceded him in death on August 14, 1996.

Herb grew up, lived and worked on the family farm with his parents and siblings raising cattle, hogs, chickens, row crops, and continued farming until he retired. After that, he continued to visit local sale barns and watched auctions on television just for fun to keep up with the markets.

Herb enjoyed coon hunting with his brothers and friends, and when younger, enjoyed roller skating at the California roller rink, especially when he and Delores were courting. Nieces and nephews were treated to tractor rides while feeding cattle, gathering eggs and picking up walnuts.

Survivors include one brother, Robert Strobel of Russellville; one sister, Francis (Bill) Jasper of Millington, Tennessee; one sister-in-law, Mary Alice Coryell of Springfield; and several nieces and nephews.

Burial will be in Trinity Lutheran Cemetery.

Memorials are suggested to the Trinity Lutheran Cemetery.

Scrivner-Morrow Funeral Homes in Russellville was in charge of the arrangements.

Those wishing to send condolences to the family may do so at the www.scrivnermorrowrussellville.com website.
To send flowers to the family in memory of Herbert Karl Strobel, please visit our flower store.