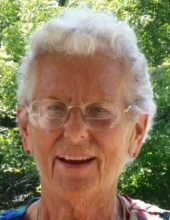 She was born June 1, 1938, in Jefferson City, the daughter of the late Martin Paul and Mabelle Clare (Waratzeck) Oidtman.

Henrietta was a 1956 graduate of Helias High School.

She began her career in 1956-1960 working as a clerk typist for the Missouri State Penitentiary. From 1979-1989 she worked in the mailroom at the News Tribune and then moved to the Missouri Consolidated Health Care Plan, retiring in 2001.

She was a member of the Cathedral of St. Joseph. Henrietta loved to fish and garden.

Mass of Christian Burial will be 11 a.m. Monday, January 7, 2019 at the Cathedral of St. Joseph with the Rev. Louis M. Nelen, officiating.

Entombment will be in Riverview Mausoleum.

Those wishing to email tributes or condolences to the family may do so at the www.dulletrimble.com website.
To send flowers to the family in memory of Henrietta Frances "Hank" Hartness, please visit our flower store.