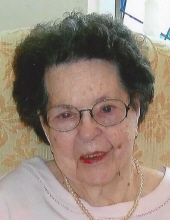 She was born August 8, 1922, in Jefferson City, the daughter of the late Frank Leo and Augusta Catherine (Schenewerk) Brondel.

Helen was a graduate of Centertown High School.

Helen was a homemaker and a loving babysitter for many children, including several of her grandchildren.

She was a member of St. Peter Catholic Church. She enjoyed sewing, embroidery, piece quilting, reading, and watching the St. Louis Cardinals.

Those wishing to send condolences to the family may do so at the www.dulletrimble.com website.
To send flowers to the family in memory of Helen Marguerite Eggen Kauffman, please visit our flower store.