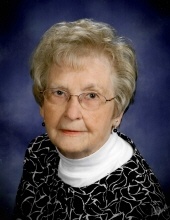 She was born March 19, 1924, in Jefferson City to Louis and Anna (Dudenhoeffer) DeBroeck.

Helen was a 1942 graduate of St. Peter Catholic High School.

Helen began her accounting career after completing two years at Jefferson City Junior College. She was the first hire at Williams Keepers in 1946 and continued until 1964. In 1964, she began working for Adrian Materials out of her home while she raised her family. In 1970, she was asked by Bishop McAuliffe to come and work as the comptroller for the Diocese of Jefferson City where she retired in December 1990. Bud and Helen were also co-owners of Dix Road Cleaners for many years.

Her real passion was to be able to give her time to her family, church, and community. She was a member of Immaculate Conception Parish in Jefferson City where she was a charter member and officer of the Immaculata Club. She served on the Parish council and served as an officer. She was involved in Mother Seaton Widow Group and Immaculate Conception Church Circle and served as an officer. She also volunteered in the I.C. parish office.

Community involvement included being a member and officer of the St. Mary’s Auxiliary, the Vitae Society fundraising committee, the Diocese of Jefferson City Finance Committee, and the DEEF committee. She was past president of the Knights of Columbus 3rd and 4th Degree Auxiliary. Helen was involved with Helias Catholic High School where she was a founding member and the second president of the Helias Mothers Club. She was involved in the early development of the Helias Foundation, and fundraising. In 1988, she received the Helias Certificate for Distinguished Service.

She was a 2016 inductee to the Helias High School Hall of Fame.

Helen enjoyed going to South Bend and watching Notre Dame Football with Bud, friends and family. She and Dad enjoyed playing cards with family and friends at any given time. She enjoyed going shopping with her family and friends whenever she had a chance. Her family will also always remember her practical jokes and wit! They never knew what was going to take place especially at the Christmas gift exchange. She enjoyed traveling with Dad to 48 out of 50 states and only missed those two because Dad would not fly.

Mom and Dad purchased the first lot in Cool Valley cove on the North Shore of the Lake of Ozarks in 1959. With active family participation they built a lake cabin over a 3-year period working on weekends and holidays. Upon completion this lake cabin was a gathering place for family and friends to enjoy the lake and life. This lake cabin holds special memories for the family and friends who shared in this, then, and now. The cabin is still a special place that family and friends gather.

She was preceded in death by her siblings and their spouses, Albert (Rosie) DeBroeck; Mary Ann (Bob) Zika; Rita Mae (Leon) Vanderfeltz; and brothers-in-law, Harold Vossen and Ralph Vossen.

Private Mass of Christian Burial for family will be at 11 a.m. Saturday, September 12, 2020, at Immaculate Conception Catholic Church with the Rev, Donald Antweiler officiating. Those who would like to participate in spirit can live-stream the service from home. The link can be found on Helen’s obituary page under the Tribute Wall at www.dulletrimble.com.

A Celebration of Helen’s Life will be held at a later date to gather with family and friends to share memories and stories of the wonderful life of Helen.

Those wishing to send condolences to the family may do so at the www.dulletrimble.com website.
To send flowers to the family in memory of Helen Elizabeth Vossen, please visit our flower store.