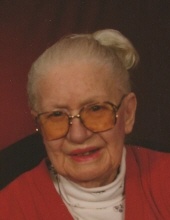 She was born January 18, 1921, in Leavenworth, Kansas, the daughter of the late Julius Peter and Vesta (Kimball) Ochs.

Harriet moved with her family to Topeka, KS at an early age. In 1939, she graduated from Hayden Catholic High School in Topeka.

Harriet began her life of service as an administrative assistant at Assumption parish in Topeka. She continued to work there until her retirement.

After retirement, she moved to Jefferson City to be with her brother. There she served several years as the bookkeeper for the Catholic Missourian newspaper for the Diocese of Jefferson City.

Harriet is survived by many friends.

She was preceded in death by her parents and her brother, Julius Ochs.

Mass of Christian Burial will be celebrated on what would have been her 100th Birthday at 10 a.m. Monday at the Cathedral of St. Joseph with the Rev. Louis Nelen officiating.

Memorials are suggested to the charity of the donor’s choice.

Those wishing to send condolences to the family may do so at the www.dulletrimble.com website.
To send flowers to the family in memory of Harriet Marie Ochs, please visit our flower store.