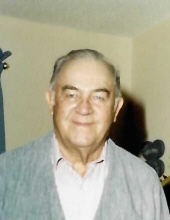 He was united in marriage on September 6, 1947, in Bonnots Mill to Ruth Florence Vogel who preceded him in death on August 22, 2009. Ruth was the love of his life. They enjoyed being together and sharing time with family and friends. Harold was lost without Ruth by his side.

Harold enjoyed his career with the Missouri Department of Transportation from 1947-1988, retiring as senior inspector.

He was a member of the Cathedral of St. Joseph.

Mass of Christian Burial will be 1 p.m. Thursday at the Cathedral of St. Joseph with the Rev. Louis M. Nelen officiating.

Memorials are suggested to Hospice Compassus, Cathedral of St. Joseph, or to a charity of the donor’s choice.

Those wishing to send condolences to the family may do so at the www.dulletrimble.com website.
To send flowers to the family in memory of Harold Francis Kuster, please visit our flower store.