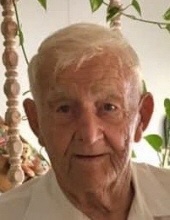 Harley Wayne Rhodes, 85, of Russellville, went to be with the Lord on Thursday, June 18, 2020, at his home surrounded by his family.

He was born September 12, 1934, in Brazito, Missouri, the son of the late Raymond and Margaret (Smith) Rhodes.

He was united in marriage on September 30, 1952, in Jefferson City to Truby Lodena Long who survives at the home.

He was preceded in death by his parents; his three sons, Thomas Wayne Rhodes, Richard Eugene Rhodes, Gregory Alan Rhodes; and one brother, Larry Ray Rhodes.

A celebration of Harley’s life will be held 2 p.m. Saturday, June 27, 2020, at Russellville Assembly of God with Pastor David Cameron and Pastor James Steele officiating. A potluck reception will be held after the service.

Memorials are suggested to Russellville Assembly of God.

Scrivner-Morrow Funeral Home in Russellville is in charge of the arrangements.

Those wishing to send condolences to the family may do so at the www.scrivnermorrowrussellville.com website.
To send flowers to the family in memory of Harley Wayne Rhodes, please visit our flower store.