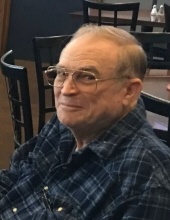 He was born May 10, 1937, in Florence, Missouri, the son of John Dennis and Ona Belle (Cook) Brunkhorst.

A 1954 graduate of Otterville High School, Gordon received his Bachelor of Science Degree in Mechanical Engineering in 1958 from the University of Missouri.

Gordon served his country with the United States Navy on the USS Bremerton Battleship.

Gordon started his career in Broomfield, Colorado as Vice-President of American Aircraft. From 1967-1995, he was a mechanical engineer and supervisor for Dow Chemical Company. He retired to his family centennial farm in 1995.

In younger years, he was an excellent trapper and sold the pelts to help pay for his college. An excellent marksman, he loved to hunt, fish, and was a meticulous woodworker. He enjoyed reading and read amazingly fast. He was fearless and earned his nickname, “Tough.” He was a fun Papa, and his favorite times were taking his grandchildren on rides at his farm.

He was preceded in death by his parents and his wife, Barbara.

Those wishing to send condolences to the family may do so at the www.dulletrimble.com website.
To send flowers to the family in memory of Gordon Charles Brunkhorst, please visit our flower store.