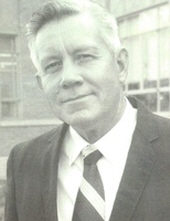 He was born March 22, 1930, in Eugene, Missouri, one of six children born to Robert Ford Spalding and Opal Bruce Spalding.

As a boy, Gary was baptized in the Eugene Christian Church. He graduated from Eugene High School in 1947.

Gary enlisted in the U.S. Navy at age 17, serving three years at Bremerton Naval Hospital in Washington, and one year as a corpsman with the First Marine Division during the Korean War.

Gary married Helen Darlene Scott on May 22, 1952, in Mountain Home, Arkansas. They had two daughters - Annette and Myra.

Gary worked for the Missouri Highway Department for 40 years, first on the survey party, and later as a senior highway designer.

Gary and Darlene were charter members of Capital City Christian Church in 1957.
Gary was a Mason for more than 50 years and a member of the Hickory Hill Masonic Lodge # 211 AF & AM. He was also a member of the Exclusive Fraternity of Honor: The “Chosin Few,” the Marine Corps League, Roscoe Enloe American Legion Post #5, and a lifetime member of the Missouri State Highway Department Employees Association.

Gary’s family would like to sincerely thank the compassionate caregivers who enabled Gary to remain in his beloved home through his final days.

Funeral services will be held at 2:00 pm on Thursday, January 18, 2018, at Scrivner-Morrow Funeral Homes in Russellville, Missouri, with a Masonic service at 1:30 pm. Brother Alan McNeely will officiate.

Interment, with military honors, will be in the Mount Carmel Cemetery near Eugene.

The family will receive friends from 4:00 to 7:00 pm on Wednesday, January 17, 2018, at Scrivner-Morrow Funeral Homes in Russellville Missouri.

In lieu of flowers, memorial contributions are suggested to the Callaway Hills Animal Shelter.

Scrivner-Morrow Funeral Home is Russellville is in charge of the arrangements.
To send flowers to the family in memory of Gary K. Spalding, please visit our flower store.