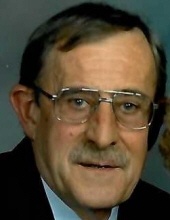 Frederick Peter Straub, Sr., 80, of Jefferson City, passed away Friday, December 13, 2019, at his residence surrounded by his family.

He was born April 22, 1939, in Chamois, Missouri, the son of the late Guy Frederick and Elizabeth Wilhelmina (Kemmer) Straub.

He was a 1957 graduate of Helias High School.

He was united in marriage on July 15, 1961, in Jefferson City, to the love of his, Donna Marie Stockman, who survives at the home.

Mr. Straub worked for the Missouri Department of Employment Security as a System Analyst Supervisor until his retirement in 1995.

He was a member of Immaculate Conception Catholic Church, Fraternal Order of Eagles Aerie 2693, former member of the Helias Council 1054 Knights of Columbus, a volunteer for the Samaritan Center; and an avid Cardinal fan.

He was preceded in death by an infant grandson, James Frederick DeWesplore.

Those wishing to send condolences to the family may do so at the www.dulletrimble.com website.
To send flowers to the family in memory of Frederick Peter Straub, Sr., please visit our flower store.