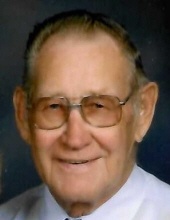 Frederick Henry Lueckenhoff, 91, of Jefferson City, passed away on Tuesday, March 24, 2020, at home surrounded by his wife and children.

Fred was born in Henley, Missouri to Katie (Eichholz) and Anton Lueckenhoff on March 29, 1928. He attended the Groose school, “a little school house down the road where he and his siblings walked to every day, rain or snow.”

He enlisted in the US Navy immediately following World War II serving in the Sea of Japan and the Pacific Ocean areas from 1945 – 1947.

He married Dorothy Mae (Schulte) Lueckenhoff on September 15, 1951, in Mary’s Home. They celebrated 68 years of marriage this past year.

When he returned home from the war, he began his life-long career working construction for Bob Livingston, and they built many, many homes in the “west end” of Jefferson City. Later he started his own construction company, Lueckenhoff Construction, where he built custom homes, apartments, and gas stations for more than 40 years. After his retirement, he continued to build custom cabinets, cedar chests, tables, and other wood creations for friends and family. His most beautiful works came during this time when he saw a clock in Branson at Silver Dollar City and said “I can make that.” He started making huge Grandfather clocks for his children and then when everyone had one, he started donating them to St. Peter Church for their fund raisers. Many of these clocks were purchased by generous parishioners in and around Jefferson City.

Fred was a member of St. Peter Catholic Church for 68 years, Holy Name Society, and the American Legion.

When Fred was young he had a great passion for sports, which he passed down to his children. He first coached little league baseball when the boys were young and then he sponsored and coached a men’s fast pitch softball team in which one of his sons was a member. His sons were some of the best athletes at Helias, which he helped support by sending all seven kids to school when he “didn’t have a pot to pee in.”

Fred is preceded in death by his parents, one brother, Victor Lueckenhoff, and one sister, Anita Evers (Ilde, deceased). He is also preceded by two sisters-in-laws, Marcella Kish and Catherine Kliethermes; one brother-in-law, Marvin Schulte; and one daughter-in-law, Dr. Rebecca Lueckenhoff.

A private family service was held at Dulle-Trimble Funeral Home followed by burial at the Resurrection Catholic Cemetery Mausoleum.

A public Memorial Mass will be celebrated later in the year at St. Peter Catholic Church. Service times will be announced in the News Tribune and on the funeral home’s website when scheduled.

During this difficult time of private services, you may show your support by joining the “Hugs from Home” program where your message will be attached to a balloon to remind the family of your love and support for them. Please go to www.dulletrimble.com homepage to submit your message.

While the family will miss his unwavering love and support, they take comfort in knowing he is reunited with so many loved ones.

In lieu of flowers, memorial contributions may be made to St. Peter’s Church in Jefferson City or the Hospice Compassus.

Those wishing to send condolences to the family may do so at the www.dulletrimble.com website.
To send flowers to the family in memory of Frederick Henry Lueckenhoff, please visit our flower store.