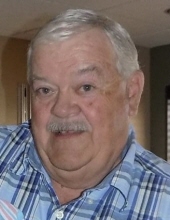 He was born July 20, 1942, in Joplin, Missouri, the son of the late Dewey Franklin and Thelma Gertrude (Roe) Phillips.

He was a 1960 graduate of Carl Junction High School.

He was united in marriage on November 9, 1974, at the Russellville Methodist Church to Janice Kay Tambke who survives at the home.

Franklin worked for the Plumbers and Pipefitters Local 317 of Columbia which later merged with Local 562 of St. Louis. His primary skill was as a welder for over 50 years. He had also served as Chief of Police for New Bloomfield and served as a deputy for the Callaway County Sheriff’s Department.

Franklin was an avid racing fan including NASCAR and drag racing. He spent many hours with his sons building trucks and going to truck and tractor pulls. He enjoyed watching college sports, but most of all he enjoyed spending time with his family, especially his grandchildren.

He was preceded in death by his parents; his son, Jeffery Phillips; two sisters, Meli Muffi and Geri Gilpin; one brother, Charles Phillips; and two brothers-in-law, Dudley Miller and Gene Hicks.

A memorial service will be held 1 p.m. Thursday at Scrivner-Morrow Funeral Homes in Russellville with Pastor Rebecca Peak officiating.

Those wishing to send condolences to the family may do so at the www.scrivnermorrowrussellville.com website.
To send flowers to the family in memory of Franklin Wayne Phillips, please visit our flower store.