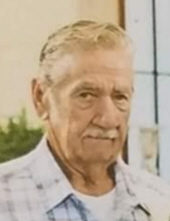 FD served his country in the United States Army in 1964-1965 at Fort Story and Fort Eustis, in Virginia, and Okinawa, Japan, working in transportation, unloading the cargo ships.

In his younger years, FD worked for Leroy Woehr at his sawmill and International Shoe Company. He became an expert plasterer for Pat Castrop Plastering & Drywall where he worked for forty-five years. During his career, he also loved working on his family farm.

He was a member of St. Anthony of Padua.

FD was an amazing gardener raising a bountiful garden and beautiful flowers. He loved to hunt, fish, mushroom hunt, and watch St. Louis Cardinals baseball. He and his wife were avid card sharks and played cards together daily. His most precious time was on his family farm, cutting cedars and raising livestock.

He was preceded in death by his parents; his wife, Patsy; a son-in-law, Roy West; a granddaughter, Tiffany Buechter; two sisters, Julianna (Ray) Bauer and Eleanor (Gary) Luadzers; a brother-in-law, Norman Baumhoer; a niece, Norma “Jean” Baumhoer; and a nephew, Danny Luadzers.

Mass of Christian Burial will be 10:00 a.m. at St. Anthony of Padua with the Rev. Anthony J. Viviano officiating.

Burial with military honors will be in St. Anthony of Padua Catholic Cemetery.

Memorials are suggested to a Charity of the Donor’s Choice.

The service will be recorded and uploaded by Monday afternoon for those that wish to watch from home. The link can be found on FD’s obituary page under Tribute Wall at www.dulletrimble.com.

Dulle-Trimble Funeral Home in Westphalia is in charge of arrangements.
Those wishing to send condolences to the family may do so at the www.dulletrimble.com website.
To send flowers to the family in memory of Franklin DeLano "FD" Baumhoer, please visit our flower store.