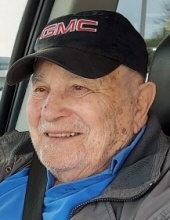 Frank Javersak Jr. passed away on June 3, 2022 just one day before his 94th birthday.

He was born June 4, 1928 in Steubenville, Ohio to the late Frank and Caroline (Matask) Javersak. Frank began his career as a fireman in Rapid City, South Dakota. He was a fireman for 19 years with the last 10 of those years as Captain. He later was a fire inspector at Ellsworth Air Force Base in Box Elder, South Dakota the VA Hospital in St. Paul, MN. At the age of 71, Frank retired as a building inspector for Salinas County, California.

He spent his retirement years living in Sweet Home, Oregon. Living in Oregon gave him the opportunity to do all the things he loved. To say Frank loved downhill skiing would be an understatement. Frank grew up on skis and made sure his son and grandchildren knew how to ski too. If he wasn’t skiing, you could find him going to baseball games or tying flies, making his own fly rods or fishing trout or salmon on his favorite streams and lakes.

Military honors will be conducted at 11:00 a.m. on Friday, June 17 at Missouri Veterans Cemetery-Fort Leonard Wood.

Memorials may be directed to the Fallen Firefighters Foundation, P.O. Box 498 Emmitsburg, MD 21727.

The family would like to thank the nurses and doctors at Capitol Region Medical Center, Compassus Hospice, the staff at Primrose and St. Joseph Nursing Home as well as Chaplain Jim Mueller for the care and kindness they gave Frank during his short residence.

To send flowers to the family in memory of Frank Javersak, Jr., please visit our flower store.