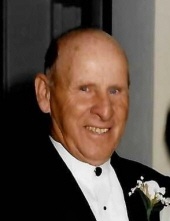 He was born in Koeltztown, Mo on Jan. 30, 1929, the son of Louise (Schaefer) and Conrad Juergensmeyer. He was united in marriage on May 8, 1954 to Genevieve Marie Reinkemeyer, who survives at the home.

Felix was a farmer his entire life, primarily of dairy and beef cattle. He loved the land and all of God’s creation.

From 1952-1954, Felix served in the United States Army during the Korean War. He was proud of his service and continued to represent his country through the Argyle chapter of the Veterans of Foreign Wars where he served as commander for 10 years. He was also a founding member of Osage County Special Services and served on the board for 23 years. He was a member of the Argyle Knights of Columbus.

Over the years Felix enjoyed his family and sharing his farm life through planting and harvesting crops, cutting silage, baling hay, cutting wood, hunting, fishing, gigging, cooking molasses and riding horses. He had a special place in his heart for Genevieve’s cooking, cold beer, fried fish, dancing, playing cards, Holsteins, Johnny Cash, John Deere tractors and Chevy pickups. In his later years, he enjoyed singing in the St. Boniface Church Choir. He and Genevieve sent all 12 of their children to Catholic elementary school at Holy Family in Freeburg.

He was preceded in death by one sister and brother-in-law, Florence and Robert Kellenberger, an infant brother and his parents.

He is survived by his wife, one sister, Sister Mary Edith, SSND, and one brother and sister-in-law, Norbert and Dorothy Juergensmeyer.

Services will be held at St. Boniface Catholic Church in Koeltztown with the Rev. Matthew Flatley officiating. Visitation will be at the church on Monday from 4-7 p.m. with a prayer service at 3:15 p.m.

Mass of Christian Burial will be celebrated at 11 a.m. on Tuesday with burial in the parish cemetery with full military honors.

Memorials may be made to Osage County Community Living or the St. Boniface Endowment Fund.

Dulle-Trimble Funeral Home in Westphalia is in charge of arrangements.

Those wishing to send condolences to the family may do so at the www.dulletrimble.com website.
To send flowers to the family in memory of Felix Joseph Juergensmeyer, please visit our flower store.