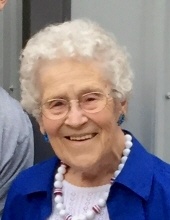 She was born on May 31, 1930, in Kansas City, Mo., the daughter of the late Warren Collins and Mary Catherine "Marie" Schnieders Collins.

She attended elementary school and two years of high school at the former St. Francis Xavier School in Taos, and graduated in 1948 from St. Peter High School in Jefferson City.

She was employed with the Missouri State Highway Department from 1948-1950, and later as an administrative clerk and cashier with Scholastic, Inc. for twenty-five years.

She was preceded in death by one son, Ronald Borgmeyer; one daughter, Janet Fedak; one brother, Warren James "Jim" Collins; and her grandparents who raised her, Ben and Elizabeth Schnieders.

Mass of Christian Burial will be 10:30 a.m. Tuesday, September 1, 2020, at St. Peter Catholic Church with the Rev. Jeremy Secrist and the Rev. Msgr. John Brennell concelebrating. The service will be live streamed for those who wish to watch from home. The link can be found on Evelyn’s obituary page under Tribute Wall at www.dulletrimble.com.

The general public is welcome to attend services while following social distancing guidelines. Facial coverings are required while in attendance.

Those wishing to send condolences to the family may do so at the www.dulletrimble.com website.
To send flowers to the family in memory of Evelyn Angeline Borgmeyer, please visit our flower store.