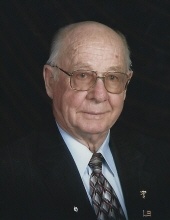 Eugene Edward Pringer, 91, of Wardsville, passed away Wednesday, October 16, 2019, at his residence.

He was born January 3, 1928, in Jefferson City, the son of the late Benjamin G. and Lena (Wilbers) Pringer.

Gene owned and operated Eugene Bus Service for over 20 years, was a meat cutter for DeBroecks Grocery Store and United Super, drove a truck for Rite Way Poultry, and was a farmer.

He was a member of St. Stanislaus Catholic Church in Wardsville and a member of the Over 50 Club. In his spare time he enjoyed spending time with his family, riding through the countryside, playing cards, and going to the casino. Gene loved eating his wife's pies and still had some left in the freezer that he was able to enjoy even after her death.

Mass of Christian Burial will be 10 a.m. Monday at St. Stanislaus Catholic Church in Wardsville with the Rev. I.C. Medina officiating.

Memorials are suggested to Hospice Compassus.

Those wishing to send condolences to the family may do so at the www.dulletrimble.com website.
To send flowers to the family in memory of Eugene Edward Pringer, please visit our flower store.