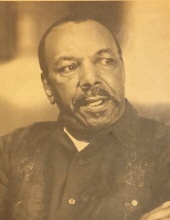 He was born July 24, 1927, in Columbia, Missouri, the son of the late Elwood Lee Thomas Sr. and Caroline Elizabeth Roberts Thomas.

He served in the United States Army during World War II and the Korean Conflict.

Elwood worked for the Missouri Department of Corrections as the Recreation Director for 15 years retiring December 31, 1989.

He was a member of Second Christian Church where he played bass guitar in the church choir and was past commander of the American Legion Tony Jenkins Post 231. From 1946-1947, he was the Golden Glove Heavy Weight Champion #234 and played semi-pro football for Columbia Falcons.

Survivors include one sister, Betty Bains Smith, North Carolina; a host of nieces and nephews and other extended family members.

He was preceded in death by his parents; one sister, Jean Nunnelly; and a brother, Richard Bains.

Burial with military honors will be in Longview Cemetery.

Memorials are suggested to the Mexico Veterans Home Assistance League in Mexico, Missouri.

Those wishing to send condolences to the family may do so at the www.dulletrimble.com website.
To send flowers to the family in memory of Elwood Lee "June" Thomas, Jr., please visit our flower store.