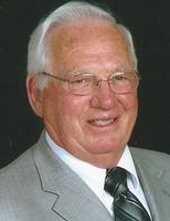 He was born November 26, 1928 in Pecos, Texas a son of Hurley Douglas and Beulah Mae Bohannan Bryant, who preceded him in death.

Elmo was united in marriage to Judith Hoskins on June 14, 1991 and she survives at their home.

He was a graduate of Jefferson City High School and served his country in the US Army in the Korean War.

Elmo worked at Payway Feed Store for 28 years. He later was the manager of Lohman Producers Exchange for 18 years, retiring in May of 1997. After retirement, he worked at the Exchange for a few years because he enjoyed the work and the customers who had became friends.

He was a faithful member of the Cornerstone Baptist Church in Jefferson City, where he enjoyed spending time with his church family. Elmo was the recipient of the Russellville FFA award for his support of the FFA program at the Russellville High School. He was one of the veterans chosen to help unveil and dedicate the High Point Renewal Association veteran’s memorial program located at the High Point school.

Elmo was always smiling and teasing. He enjoyed living in the country and was proud of the land he owned. He raised cattle and chickens, gardened and rode 4-wheelers on their farm. His grandchildren love going to the farm to ride 4-wheelers and have wiener roasts with Papa Elmo. Nothing made him happier than being surrounded by his children and grandchildren, especially for family dinner and holidays. For many years, Elmo participated in the local holiday parades with his grandchildren.

In addition to his wife, Judy, he is survived by five children and their spouses, Jan and Joe Soucie of Russellville; Ricky Lee Bryant of Lohman; Douglas and Melanie Bryant of Rocheport; Robin Barbour of Lohman and Jeff and Linda Bryant of Lohman; three step-children and their spouses Travis and Joyce Hoskins of St. Martins; Randall and Maria Hoskins of Jefferson City and Bradley Hoskins of Holts Summit; five grandchildren, Cody Barbour, Alex Barbour and fiancé Sade Campbell, Shelby Bryant and husband C.J., Beau Bryant and Colter Bryant, eight step grandchildren, Cortney Knight and husband Zach, Matthew and Nathan Hoskins, Jayson, Mollie, Adam and David Jackson and Britney Copping, two step great grandchildren, Skyler Jackson and Eli Knight (due to be born in April), a brother and sister-in-law, Robert and Mary Lou Bryant of Lohman; a half brother, Hurley Douglas Bryant, Jr. of Kansas, two half sisters and brothers-in-law, Debbie and Brent Berge of Arizona and Christina and Joe Karcz of New Jersey; along with many nieces and nephews, other relatives and friends.

Interment, with military funeral honors, will be in the Enloe Cemetery west of Russellville.

The family will receive friends from 9:30 a.m. until service time at the Cornerstone Baptist Church.

Scrivner-Morrow Funeral Homes in Russellville is in charge of the arrangements.
To send flowers to the family in memory of Elmo Douglas Bryant, please visit our flower store.