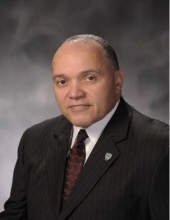 Ellis was born June 18, 1957, in Laurel, Mississippi, the son of the late Earl and Martha Gay.

Ellis was united in marriage on August 1, 2003, to Ann Marie Elizabeth Wilson who survives at the home.

Ellis is a 1975 graduate of Jefferson City High School and 1980 graduate of Lincoln University.

Ellis was a devoted and loving husband and an amazing father and grandfather. Ellis was passionate about life and helping others be the best version of themselves. He was a wonderful cook and enjoyed traveling by train.

He was preceded in death by two siblings, Doris and Gregory McSwain.

In lieu of flowers, memorial contributions can be made to the Boys and Girls Club of Jefferson City, in care of the family.

Those wishing to email tributes or condolences to the family may do so at the www.dulletrimble.com website.
To send flowers to the family in memory of Ellis McSwain, please visit our flower store.